Cases of use
Example 1 Searching similar 3D patterns between the cardiac ion channels NaV1.5 and TASK-1 (Case of use described in the manuscript). Download PDB files: NaV1.5 TASK-1 Using the following parameters:

Results: Link Example 2 The Serotonin Transporter (SERT), the Monoamine Oxidase A (MAO-A) and the Serotonin Receptors (5-HT2A in this example) are proteins considerably different from a structural point of view. SERT is a transmembrane protein belonging to the SLC6 family, MAO-A is an outer mitochondrial membrane-bound flavoprotein, with the FAD cofactor covalently bound to the enzyme and the 5-HT2A is a subtype of the 5-HT2 receptor that belongs to the serotonin receptor family and is a G protein-coupled receptor (GPCR). Their global sequence identities are between 15 and 35%. Nevertheless, the neurotransmitter serotonin (5-HT) is a common ligand, and the physiological actions of these proteins are related to the regulation of adequate levels of 5-HT in the synaptic cleft. Here we compared SERT(5I6X) with MAO-A(2Z5I) and 5HT2A(6A93), using the following input text file: 5I6X:A-2Z5I:A
5I6X:A-6A93:A Download text file Using the following parameters:

Results: Link Example 3 A lack of p38γ and p38δ increases the efficiency of innate immune cells against systemic Candida albicans infection. This lack also reduces the elevated inflammation behind organ damage. Drugs that inhibit these proteins have potential use as a therapy against systemic candidiasis, a condition affecting thousands of people each year worldwide. From 10.15252/emmm.201708485 Here we compared the protein p38γ (1cm8; MAPK12) with p38δ (4eym; MAPK13) using the following parameters:

The results showed interesting similar 3D patterns located in zones with high druggability scores. The most similar pair of sites are those composed of the residues VAL41, LYS56, MET109, ASP171 in 1cm8 and VAL39, LYS54, GLU72, MET107 in 4eym (#14, GScore=70.3%). Results: Link In the next figure are shown these two sites aligned. All the identical residues are adequately paired. Additionally, the residue ASP has been matched with the residue GLU. In transparent blue are depicted the residues of the 4eym proteins. In transparent red are depicted the residues of the 1cm8 protein. 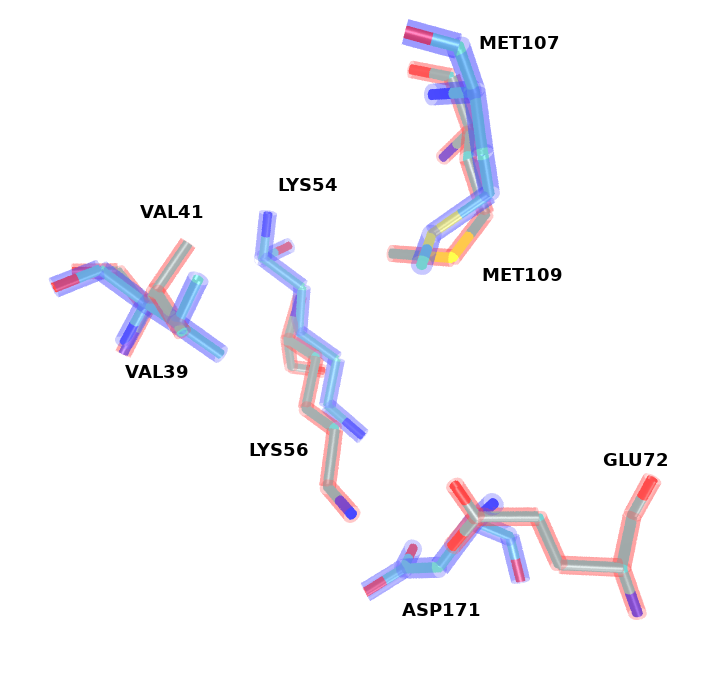